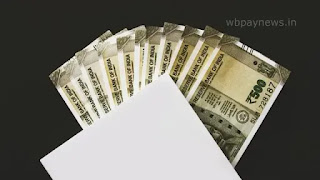 Subject: Grant of Ad-hoc Bonus to the State Government Employees and some other categories of Employees for the year 2021-2022.

The undersigned is directed by order of the Governor to say that the Governor is pleased to decide that the State Government employees who are not covered by any of the productivity linked Bonus Scheme and whose revised emoluments did not exceed Rs. 37,000/- per month as on 31st March, 2022 will be entitled to ad-hoc bonus for the accounting year 2021-2022 at the rate of Rs. 4,800/- per head. The upper eligibility ceiling of Rs. 37,000/- p.m. as on 31st March, 2022 will be applicable irrespective of whether the emoluments are drawn in the pre-revised or revised structure of pay or on fixed/consolidated contract pay.

2. The benefit will be admissible subject to the following terms and conditions:-

i) Ad-hoc Bonus admissible under this order will be worked out on the basis of emoluments as admissible on 31.03.2022. For the employees drawing pay and allowances in terms of the West Bengal Services (Revision of Pay and Allowance) Rules, 2019 the term ‘revised emoluments’ in this order will mean the pay drawn in the applicable Level in the Pay Matrix in the revised pay structure, dearness allowance and includes the non-practising allowance, if any, but will not include any other pay and other allowance such as house rent allowance, medical allowance, compensatory allowance, etc.

iii) The employees who rendered at least six months continuous service during the year 2021-2022 will be eligible for payment of ad-hoc bonus under this order.

Pro-rata payment will be admissible in such cases to the eligible employees for periods of continuous service during the year ranging from six months to full year, the eligibility period being taken in terms of number of months of service (rounded off to the nearest number of months). A fraction of 15 days of more should be counted as one month.

iv) The amount of ad-hoc bonus on pro-rata payment as admissible under 2(iii) above will have to be calculated according to the following formula:-

v) The casual workers who have put in work at least for 120 days and the employees on consolidated pay in the year 2021-2022 will also be entitled to ad-hoc bonus under this order according to the following formula:-

The salary/wages in these cases should have the same meaning as ‘revised emoluments’ as defined in Para 2(i) above.

In case of failure, the disbursement should be made as early as possible before the Festival of Id-UI-Fitre/Durga Puja.

4. The charge in respect of payment of ad-hoc bonus under this order will be debitable to the detailed head viz., “Ad-hoc Bonus” the opening of which was sanctioned under the ‘Salary’ head sub-ordinate to all Major, Minor and sub-heads in the Revenue Expenditure section of the State Budget in terms of Para 9 of this Department’s Order No. 4611-F, dated 22.04.1988 and necessary fund for this purpose have been provided under the above detailed heads in the budget grant available for 2022-2023.

5. The Governor is further pleased to direct that the benefit of ad-hoc bonus sanctioned under this order will also be available to the different categories of employees who had been allowed the same in the last year in accordance with Finance Department’s Memo. No. 1491-F(P2), dated 06.05.2021 by issue of Government Orders by various Departments in this connection. As done in the last year, orders for grant of ad-hoc bonus in respect of the employees of Statutory Bodies/ Local Bodies/ State aided Non-Government Educational Institutions and such other categories of employees of various establishments, who were allowed ad-hoc bonus/ex-gratia at par with the State Government employees or at the rate not more than the rate as approved by the Government in the last year, should be issued by the Departments concerned without referring the file to Finance Department, Group ‘P2’.

6. Clarifications issued in previous years in respect of various points raised in connection with admissibility and drawal of ad-hoc bonus would continue to apply.